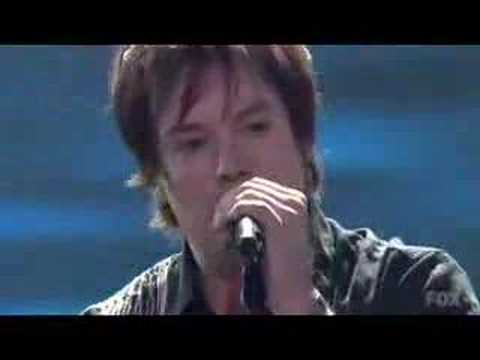 If you've been watching Season 7 of American Idol from day one, the last person you'd bet on winning the entire competition would be David Cook, however, the past three weeks on the show have drastically changed many voters opinions of this particular contestant and many other contestants as well. Each season of American Idol brings us different contestants that fit into different niches, and David Cook is Season 7's resident rocker. His voice has incredible range and he has a knack for choosing songs that showcase it as well.

Since reaching the Top 12, you can see by the judge's reactions to his singing that they at first did not consider him to be a front runner, and are surprised and pleased to see the confident side of him emerge through is songs. In a season where song choice is key, David Cook has consistently been choosing songs that show his singing ability and the judges and America couldn't be happier.

Top 10 week brought the theme of "The Year You Were Born" and being born in 1982, Cook was able to choose Michael Jackson's 'Billie Jean'. Ryan Seacrest announced David Cook's song as Chris Cornell's version of 'Billie Jean'; however he got lost in the shuffle of the female audience members so it was somewhat hard to hear what Ryan said. Because of this, after David's performance, by the judge's reactions, it almost seemed as if they believed that David had created this version himself (or that they had heard of, but never actually heard Cornell's version before).

Not that this diminishes from his performance at all. David has a history of putting a rock spin on many classic songs, and even after listening to Chris Cornell's version, you can see that David even put his own spin on this particular adaption of 'Billie Jean'. With only a minute and half to perform, David Cook brilliantly arranged this song in order to showcase his voice, a voice that reminds us a lot of Season 5 contestant Chris Daughtry. However, after this particular performance, many people are saying that Cook is even better than Daughtry, so its very possible that voters this year won't make the same mistake twice and that David Cook could experience the Top 2.

No matter how far he makes it in the competition, its easy to see that David Cook can sing. With rock being such a driving force in the music industry these days, it won't be hard for Cook to make a name for himself, with or without the help of winning the Season 7 American Idol crown. Until he meets his fate, it will be interesting to see what David Cook brings to the show in the coming weeks. Hopefully America will continue to see that his presence on the show is worthwhile and that he definitely deserves to remain a competitor.