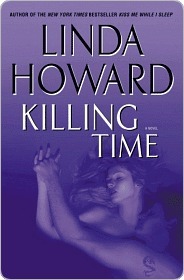 I was inspired by Catherine Coulter's book "TailSpin" to read a Linda Howard book; Ms. Coulter has a shootout in a bookstore where one of Ms. Howard's books is plugged by a bullet. I want to thank Ms. Coulter for the mental reminder that Ms. Howard is an excellent author and I really should see if there is anything of hers I haven't read.

I found "Killing Time" at my last trip to the library. It has a paranormal element to the suspenseful who-dun-it novel. I'm not going to explain the paranormal phenomenal because I don't want to spoil the surprise for you. I will tell you it involves a missing time capsule, if you are asking, "So what?" Let me explain further.

The time capsule was buried on January 1, 1985 in front of the Peke County Courthouse in Pikesville, Kentucky, right next to the flagpole. Twenty years later on June 27, 2005, someone digs up it up between 2 a.m. and 2:01 a.m. That's right; in one minute, the capsule is dug up and taken away. There are two witnesses: the security camera trained on the courthouse and the camera across the street on the hardware store.

The videotape from both cameras shows that 2:00 a.m. there was a big flash of light and one minute later the light is gone. Neither video takes shows a person digging a hole nor there are no footprints, however there is a big hole in the ground where the time capsule used to be. So who did it? Why did they do it? Most of all how did they do it?

Knox Davis, the chief county investigator for Peke County is intrigued, which isn't surprising because it isn't in his nature to let a puzzle go unsolved. To add to the puzzle, six chickens were killed at Jesse Bingham's farm and the only clue is several bright flashes of light. There were no footprints at this crime scene either.

If that isn't enough, a fifty-year-old respectable lawyer named Taylor Allen is murdered with a spear in a house that was locked up tight with deadbolts. There are no clues left behind not even footprints. So who did it? How did they do it? Why a spear? Why did they kill Taylor Allen?

Then Nikta Stover shows up with a FBI badge. She was snooping at the Allen house when Knox Davis caught her in the act. She produces the FBI badge to explain her reason for being there. Her badge proofs to be a fake. Who is she? Why is there? What is her interest in Taylor Allen and the time capsule? Who ever she is, she is the third agent her bosses sent to investigate. The first agent died in the line of duty and the second was unable to find any answers. Oh, I should mention that moments after she introduces herself to Knox, Nikta has a sniper shooting at her. Who wants her dead and why?

Read "Killing Time" soon, it is fascinating book with elements of romance, suspense, mystery and the paranormal. Beside you have to read it to find all the answers to the questions. I wish I could tell you more because I would love to talk about some of Ms. Howard's ideas about the…..oops I nearly said too much. Do read this book, it was so good that I need to talk about it some more to somebody.

Other Book Reviews by Genie Walker: