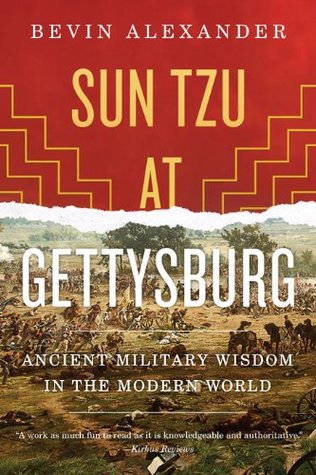 The Art of War has been around 2,500 years, but Western awareness didn't come up until around the time of the Vietnam War. General Vo Nyugen Giap , it was learned, followed the teachings of Sun Tzu and Mao credited The Art of War for its much of the meat in his writings onguerrilla warfare.

The Art of War was a masterwork whose concepts were applicable at all levels of combat, from General Patton down to Sergeant Rock . Author Bevin Alexander analyzes how Sun Tzu's rules dovetail with experiences during select major conflicts of the past two centuries. Think of it as an expansion on the concept used in the History Channel's documentary "The Art of War".

Gettysburg is just one of the events selected for analysis. Sun Tzu emphasized proper intelligence and Robert E. Lee didn't have it. Jeb Stuart's cavalry, his prime source of intelligence, needed to be on a short leash but instead was off with his cavalry like Sauron's Nazgul . Contemplating the disastrous Pickett's Charge across one mile of open field towards the Union position — I saw it a few weeks ago, it's a long, long walk — Lee violated several principles ( "know your enemy and know yourself and you will win 100 battles" and "some battles should not be fought" –the Federals were dug in on the high ground that gave them a clear edge).

As any viewer of Ted Turner's movie, Gettysburg, will know, Lee's second in command, General James Longstreet, tried repeatedly to talk Lee out of even confronting the Yankees at Gettysburg. He wanted Lee to swing south toward Washington, move towards Washington until ideal ground was found and invite the attack the Federals must make. Alexander says Washington was never a realistic target due to thedefenses Lincoln insisted on. On the other hand , says Alexander, but Philadelphia was a viable targetand taking that city could've cut the critical rail line thatsupplied Washington, achieving the same effect as direct assault.

The British during the Revolutionary War never even considered the simple option that would've won the war, says Alexander…using the Royal Navy to close the colonial ports which would putirresistible pressure on the insurgents. Aside from the fact that the Royal Navy and the Army may have had tunnel vision about their missions, it's also possible the British disregard for the real strength of the revolutionary spirit kept them from taking full steps towards ending the war but instead led them to slowly escalate. It surprised me somewhat that in summarizing the progress of the war, a couple pages spent on General Daniel Morgan's creative tactics at Cowpens that broke the British southern strategy did not include some obvious references to Sun Tzu . It seems a perfect opportunity. (If only to quote: "the basis of all warfare is deception," which Cowpens showed above all). A minor quibble.

At Waterloo, Napoleon had two bozo generals carrying out his orders and, in the bargain, made numerous mistakes he'd nerve made before. Sun Tzu : hire competent generals.

In World War I, both sides were trapped into trench warfare with tremendous casualties in frontal assaults on each other. The arteriosclerotic brass had no concept of anything other than direct assault. They were like Pickett's Charge at Gettysburg and we know how well that worked out. Sun Tzu advised there be two attacking forces, a holding force in front, and a flanking force that attacks from the side or from behind while the battle continuesagainst the holding force. There was nothing like this in the trenches and British and French forces were mentally stuck in that groove. On the other hand, the German blitzkrieg of 1940 did just that with huge success…the main force attacked through the Ardennes as the Allies were engaged by a force coming through Belgium and Holland. On the Eastern Front, however, Hitler repeatedly violated Sun Tzu's principles and paid the price.

One of my favorite concepts from Sun Tzu is "the greatest general is not the one who wins 100 battles, it is the general who achieves his goals without fighting." General Douglas MacArthur, defying military critics but supported from thepolitical leadership, pulled off a daring invasion at Inchon (the Chinese did warn theNorth Koreans it could happen but were ignored). Suddenly, the North Koreans south of the DMZ were completely neutralized, without supplies, immediately easing the pressure on the defenses inside the Pusan perimeter. Unfortunately, MacArthur was beyond control after that amazing performance and overstepped himself, even with clear warning from the Chinese and even a large-scale Chinese warning strike.

A very interesting book with insights on both the ten battles and campaigns discussed as well as on the application of Sun Tzu's principles.