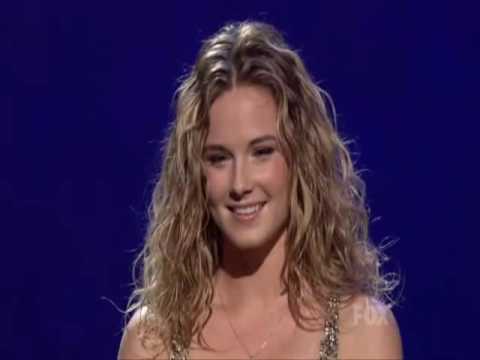 This Tuesday on American Idol Kristy Lee Cook sang the great Martina McBride's song "Anyway". I have not really been a fan of hers throughout the show, but I think she did a very good job this week. This was probably her best performance. She was good when she sang "God Bless The USA" and she was OK on a few other songs.

She just is not blowing the audience away. I don't think she is the worst of the top 12. She didn't deserve to be in the bottom three every time, maybe only a few. The judges are just hard on her because she is not the best and they want everyone to be the best. If she was on the show 4 years ago she probably would have blown some of the contestants out of the water and had a chance to win.

The talent is just so amazing and dynamic this year and she still needs a little practice to get on the same level as the other contestants. I think her biggest problem is her song selections. She does have a good voice.

The only problem is there are a lot of talented people this season and I hate to be mean, but they are just better than her. I believe that she still has room to grow. She could make it as a country singer. I think she has a good chance at becoming a country singer because of American Idol.

She probably will not win American Idol, but she is a sweet pretty girl and she can sing. I believe she has a good shot at being successful in the music business. She really didn't have chance at winning the title because the talent is just amazing this season and even good singers like her are going to be overlooked because they are not unique or original. It is a good thing that she is on American Idol though, because she will probably have a career in country music.